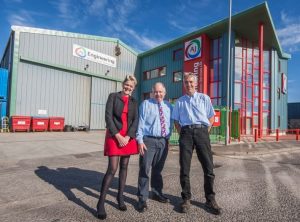 NEWCo has been bought over by a Moray-based engineering and construction company.

Alan James, managing director of AJ Engineering said he was delighted with the acquisition which took place on October 1: “This was an important move for us as a company and I know that my existing firm and NEWCo will complement each other very well.

“Structure wise nothing is going to change. The NEWCo name will stay, the staff will remain as they are and apart from one of our Forres team going to Fort William to run things down there alongside NEWCo’s production manager, it’s business as usual.”

Alan James set up the fabrication company in 1999 and it has grown steadily to become a respected provider of specialist fabrication and engineering services to the construction, railway, renewable energy and water treatment industries through Scotland and the Islands.

In 2012 the company which has 62 staff carried out a £600,000 expansion of its premises giving it the capability of competing for larger contracts.

Two of its most public projects include the steel fabrication work for the Firth of Forth replacement and gantry work for the Kessock Bridge.

Alan James has bought NEWCo which has 13 staff members from husband and wife team, Ron and Denise MacLennan who have been leading the company since 2000.

Alan said: “Ron and Denise have been very active in the company and to smooth the transition they are still going to be on hand to help. They have a great business and with AJ Engineering behind it, we will be able to develop it further.”

He added: “NEWCo have a great client base, in fact we share some of the same clients. However some of their customers need more engineering support which until now they have been unable to offer. We have bigger facilities in Forres to help with the manufacturing. I have no doubt that this new set up will work well, we have the same ethos and philosophy. The acquisition can only work well for both locations and of course the clients.”

Ron and Denise took over NEWCO in 2000 in management buyout although the company was established in 1985.

The production facility in Fort William encompasses welding, rolling, shearing, punching, bending, plasma profiling facilities and machining. They are suppliers to a wide range of engineering based industries in both the large scale industrial sector and private sector.

Ron said: “We took over in 2000 as we saw prospects in the company. We were sure that we could go places with it and that it would have a bright future. However, we both feel that we have taken it as far as we can.

“However, we are not simply walking away, we will be on hand to help with the transition and as Alan says, it will be business as usual.”

Denise added: “We really feel that NEWCo will go further being under a bigger entity. The industry is changing so much and as smaller business, we are struggling to keep up and be able to fulfil certain criteria. AJ Engineering has all of these requirements in place already. It seems a perfect fit and we have no doubt that Alan will be able to take NEWCo even further.”