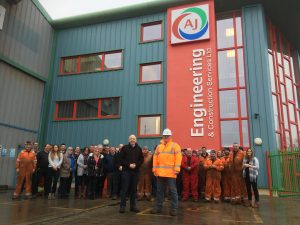 The team from the company’s HQ in Forres

AJ Engineering the sister company of NEWCo is celebrating 20 years in business with a calendar of events including a virtual bike ride covering 21,000 miles the same distance travelled completing jobs in one year.

All staff at the firm are being encouraged to take part in the challenge which will raise money for three charities – the Moray branch of Marie Curie, Diabetes UK and Fort William-based Star For Harris

AJ Engineering & Construction Services was founded by managing director Alan James in 1999 and this year, the staff plan to mark the milestone.

Alan started the company after being made redundant from William Reid Engineering.

He said he was looking forward to the year ahead: “Twenty years in business is a massive achievement for anyone, but I think in this industry it’s definitely something to celebrate. Over the 20 years there have been massive changes in the industry, housing crashes and recessions. There have also been boom times too, so I think it’s important that we take a step back and acknowledge the hard work of everyone that has been involved with the success of the company.”

Throughout the year other events will include social evenings, Scottish Apprenticeship Week and the company plans to take part in Moray Doors Open Day which will incorporate a family and customer fun day as well as being open to the public.

“We have tried to create a mixture of events. Some are just for fun, like the family and customer day as part of the Moray Doors Open Day,” explained Alan. “Other events will be to showcase what AJ Engineering is all about. For example, one of our graduate apprentices who is a STEM ambassador will be visiting Forres area primary schools with hands-on activities and will be talking a bit about what we do at the company. AJE has many strengths, but if you had to pick just one, it would be its investment in young people and apprenticeships, and I see no reason why that should change.”

The charities that the company is supporting have also been carefully chosen and anything raised by the staff will be matched by the firm.

“We thought hard about which charities to support,” explained Alan. “Diabetes UK was an obvious choice for me. I am diabetic, but I only found out when I was setting up the company. I had to have a medical and that’s when I got the news. Marie Curie is also a great choice and we know the money will stay in the local area. We have had members of staff who have been affected by cancer whilst Star For Harris is the chosen charity of our sister company NEWCo which is based in Fort William.”

AJ Engineering is known for its expertise in building bridges and creating bespoke items for its customers. It will shortly begin a £300K project on the Kessock Bridge for The Spencer Group to fabricate and replace the inspection gantry which is used to carry out examinations on the bridge.