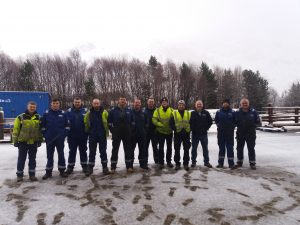 TWELVE workers from NEWCo will be putting their best foot forward next month, when they scale Ben Nevis to raise money for a local charity.

The team have taken on the challenge to raise money for Star For Harris, a cause close to the heart of general manager Neil Worsdall.

Neil has continually supported the charity as he is a friend of the family who founded it in memory of their son Harris who passed away at just 15 months old after a battle with a cancerous brain tumour.

The NEWCo team will also be joined by accounts manager Liz Flatt and fabrication manager Craig Johnston who are based at AJE’s HQ in Forres.

Neil said: “We are all really looking forward to the challenge. There are probably four or five of the team who have done it before. Some of the lads were talking about wanting to do it, so we thought it was a good idea to do it as a group, and also raise money for Star For Harris at the same time.”

Neil an avid hillwalker added: “I’m confident that we will manage it. It can be a long slog and a toughie, but I am sure we will crack it. We are all reasonably fit. Myself and a couple of the experienced guys will do Ben Nevis the week before, just to check the conditions.”

The walkers have all been issued with sponsorship forms and NEWCo supplier Highland Industrial Supplies has offered a prize to the person who raises the most money.

“This just adds that we bit more competitiveness amongst the team,” explained Neil, “and we thank HIS for their contribution.”

In 2017, teams from AJE and NEWCo were involved in the construction of the Glen Nevis bridge which gives access to walkers and tourists to the famous mountain.

The 139 foot long bow arced pedestrian bridge was fabricated by the team at AJE and was installed with support from the NEWCo team.

The bridge was so big that it had to be driven down to the Glen Nevis Visitor site in Fort William from the Forres depot in several sections and was bolted together on site.