Connections made on hydro scheme 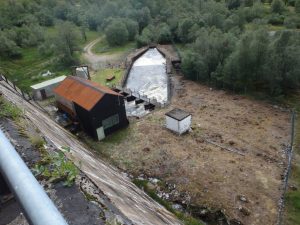 The site before works began

The NEWCo team is involved in a project to install a new hydro power scheme at the Blackwater Reservoir above Kinlochleven.

The project by Green Highland Renewables will generate enough electricity to meet the annual needs of 1,200 Scottish homes.

The contract which involves a range of pipe fabrication, structural steel fabrication, specialist coating and mechanical engineering works was awarded to NEWCo in February and careful planning and manufacturing has been taking place at the Fort William-based facility prior to installation by our team.

NEWCo general manager Neil Worsdall explained: “Basically, the new hydro plant will draw water from the existing Blackwater Dam and our involvement has been to provide the pipework to enable that connection.

“The team has used the large yard space at NEWCo to trial erect some aspects of the project prior to galvanizing, coating, and then final assembly on site.

“Since then we have had six engineers on site so far and it is expected that this part of the project will be completed towards the end of July.”

Neil added: “We have already been on site for three weeks and for that part of the job we were working in the chamber to install the retraining frame and a section of pipework. The chamber has to be drained down so we had a three-week window to complete that part of the works.

“The steel frame we had to fabricate is a substantial structure and comes in at over four tonnes whilst the pipework is 1.6m in diameter.”

The blackwater reservoir was constructed between 1905 and 1909 and it was the first hydroelectric project in Britain. It was built by the British Aluminium Company to supply power to its smelters in Kinlochleven and later Fort William. The scheme harnesses waterpower from the western section of the Black Water chain of lochs from Rannoch Moor in the east to Kinlochleven in the west.

NEWCo has a long history in the renewable industry and with being based in Fort William it has given the team the opportunity to work on a number of hydro schemes over the years.