Production increases due to equipment install 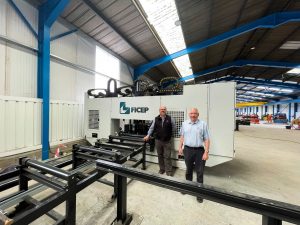 EQUIPMENT which is part of a multi-million-pound expansion for AJ Engineering has been installed meaning we will be able to double the production capabilities and employ more staff.

And we are already seeing an increase in demand due to the installation of the equipment as part of the £2.5 million development at Waterford.

The fully automated equipment which was imported from Italy will carry out the marking, drilling and cutting tasks on long steel sections allowing our skilled work force more time to focus on complex fabrications.

Alan James, explained: “There are two principal machines that we have bought and the investment means that our highly trained staff are now more available to focus on bespoke work which is more representative of their skill whilst the machinery takes control of the repetitive tasks such as drilling and cutting. 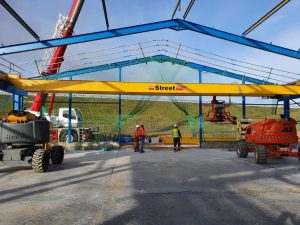 Works being carried out to get the old sawmill building ready for the new equipment to be installed.

“Essentially, the new equipment marks, drills and cuts the steel. Traditionally, we would have had to have a member of staff with a tape measure doing this and the process would have taken about 45 minutes, but now, the machine can do it all in around five minutes.

“The purpose of this investment is to make us more efficient, and it will provide the company with the ability to increase its throughput but at a lower production cost.”

The development has seen the refurbishment of what was a sawmill at Waterford, and over the next three years, Alan expects the expansion will see the staff roll of around 80 increase to over 100.

He said: “Highlands and Island Enterprise (HIE) has been fully involved in the development of our expansion plans and supported us in this project with a grant of £420,000 for our investment in the first and second phases. 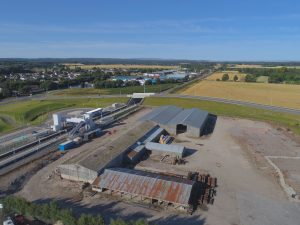 The site before works began

“This is a three-year, three phase project. Phase one is now complete. Phase two will be to install an automatic shot blaster and the third phase is the purchase of a plate processor.”

The last significant investment from AJ Engineering was in October 2015 when it bought the Fort William-based engineering firm Northern Engineering & Welding Co (NEWCo).

AJ Engineering currently sits on a total of 2.25 acres at its Greshop Industrial Estate sites, whilst the sister company NEWCo comprises a workshop within 2.7 acres.