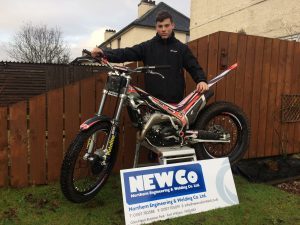 Calum Easson will compete against over 200 other bikers

A NEWCo employee has been accepted to take part in the world renowned International Six Day Trials in Fort William this year.

Second-year apprentice Calum Easson will compete against 280 riders from all over the world in the gruelling challenge.

The Six Day Trials is the sport of observed motorcycle trials and is best described as a test of riding skill over observed sections.

Unlike other motorcycle disciplines, the trials are not about speed, but balance and concentration. When competitors ride the observed sections their feet must remain on the footrests of the motorcycle and they must remain between laid out flags or markers.

The sections vary in length and severity, and riders are penalised if they put their feet down to help them ride the section, and more so if they fail to negotiate the section in its entirety.

Calum who purchased a new bike for the event said he has been regularly practising at least 30 miles on his training sessions: “It’s a prestigious event and there will be competitors from all over the world including as far afield as Australia and the USA. I am excited although a little nervous to be taking part. I have competed before in other events throughout Scotland, but this is the big one. Finding places to practise is not easy, but I have been managing to get at least 30 miles in every Sunday.”